I’ve only read One Last Stop in January of this year, but the thing is, I already know it’s a new favourite. 🥰 Writing this review will be extremely hard, though, and I already know I’m not going to do this book any justice, but I’m going to give it a try (and I highly advise you check out Theresa’s review, because she flawlessly put all of my emotions into words, besides exploring SO MANY details of OLS 💕). 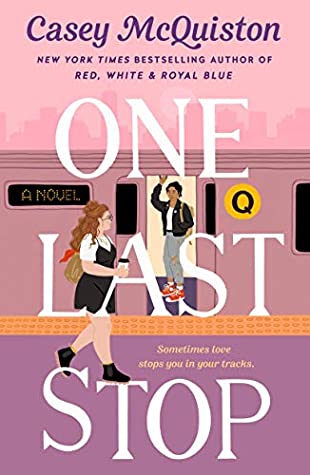 Cynical twenty-three-year old August doesn’t believe in much. She doesn’t believe in psychics, or easily forged friendships, or finding the kind of love they make movies about. And she certainly doesn’t believe her ragtag band of new roommates, her night shifts at a 24-hour pancake diner, or her daily subway commute full of electrical outages are going to change that.

All hard edges with a soft smile and swoopy hair and saving August’s day when she needed it most. The person August looks forward to seeing on the train every day. The one who makes her forget about the cities she lived in that never seemed to fit, and her fear of what happens when she finally graduates, and even her cold-case obsessed mother who won’t quite let her go. And when August realizes her subway crush is impossible in more ways than one—namely, displaced in time from the 1970s—she thinks maybe it’s time to start believing.

I received a copy of this book via Netgalley in exchange for an honest review.

One Last Stop was one of my most anticipated new releases of 2021, and I’m BEYOND LUCKY that I have been able to read it earlier. Having really enjoyed Red, White and Royal Blue by the same author, I was really looking forward to this, and I knew I was in for a treat, but I wasn’t expecting this book to be so special. 😭

OLS follows August, who’s in her early twenties, and just started University in yet another place, fearing what will come after graduation. She’s found a place to stay, a job to help her pay her bills and every day, she takes the subway. And there, she finds Jane, beautiful and captivating, whom she can’t get out of her head. What McQuiston does best is creating interesting, real characters, and August is no exception. 💕 I absolutely adored following her, and I found her incredibly relatable. After all, we’re also worried about classes and struggling with money (and how often do we have a crush on strangers irl? 😅), and her personality and humour were so characteristic of a 23-year-old.

I am also very much in love with Jane. She’s mysterious, kind, and unpredictable, and I found it so interesting that she’s displaced in time from the 1970s, meaning that we get to know her from back then (her strong and fearless self who was really involved in the queer context in the 70s, who protested, and who endured so much), and also that we get to see her curious side with August, rediscovering the world. On that note, August and Jane’s relationship was absolutely *chef’s kiss*. 💕 It’s fun, it’s flirty, it’s soft, it’s sexy (THE YEARNING). I also found it absolutely hilarious that they were both crushing and clueless. 😂

Moreover, I found myself really enjoying getting to know every secondary character in this novel (that’s McQuiston’s power), especially August’s roommates. I adored how well done the found family trope was explored in OLS, and honestly, how it took these struggles we face, as twenty-somethings – when we don’t exactly feel like adults and we’re just trying to find our place in the world – and delivered this beautiful, hopeful masterpiece, that I’ll surely keep with me for so long. Besides, the cast is almost entirely made out of queer characters, featuring a wide range of identities, which made it even more special! ✨

One Last Stop comes out in early June and I’m really looking forward to have my own physical copy on my hands! This book gave me so many ✨ EMOTIONS ✨, and I have so many quotes written down that I wanna annotate and re-read many more times to come!! And, of course, I’d recommend it to everyone 🥰

Are you planning on reading One Last Stop when it comes out? 🥰

3 thoughts on “One Last Stop by Casey McQuiston”